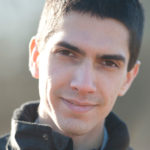 Krishan Coupland is a graduate from the University of East Anglia MA Creative Writing programme. His writing has appeared in Ambit, Aesthetica, Brittle Star, Litro and Fractured West. He won the Manchester Fiction Prize in 2011, and the Bare Fiction Prize in 2016. In his spare time he runs and edits Neon Literary Magazine. He is unduly pre-occupied with theme parks. His website is www.krishancoupland.co.uk.

When You Lived Inside The Walls (extract)

The rats don’t take the poison. You see them everywhere now. They writhe out of sight in darkened corners. They worm their way into gaps that seem impossibly small. When you go to tuck Millie in at night you’re sure that you hear a frantic flurry of scurrying just before you open her door. You see shapes moving beneath her covers – humped bodies the size of kittens.

From the kitchen window you watch as she holds court over her gang. It is fascinating in the same way that an infection is fascinating. She has set out a blanket and studded it with plastic plates, plastic teacups filled with water poured from a plastic kettle. Cross-legged she sits and the rats swarm about, climbing on her knees, poking their pink little noses in the air. She giggles. Her favourites perch on her shoulder, sleek, black and huge.

Even when she’s with you she’s not quite the same. Sometimes you come in from another room to find her peering beneath the table. Sometimes, through the walls, you’re sure you hear her squeaking.

(from When You Lived Inside The Walls and Other Stories)