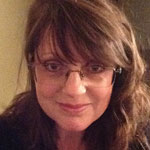 Di Slaney is a poet and smallholder who lives in Nottinghamshire. She has an MA in Creative Writing from Nottingham Trent University and has co-owned Candlestick Press since 2010. Her poems have been published in various magazines including Magma, The Rialto, The Interpreter’s House, Brittle Star, LeftLion and Lighten Up Online, and shortlisted for the Bridport Prize. She won first prize for poetry in the inaugural Brittle Star Writing Competition (2014). Dad’s Slideshow is her debut pamphlet.

He smiles slyways at the camera
while you scud down the slope
to the river, his sticky hidden palm
a firm shove print on your back. I hope

you landed softly, didn’t cry your fears
of cows and calves staking claim
to sunpatch heaven, stayed still
waterside till he teased your name.

Then he made you scramble, those
elasticated jeans dragging pats
up the bank in their frayed hems,
brown trails scouring his nose.

You are the dropped stitch, the third thread,
the selvedge child, the carriage head.

While he battles with a rock so big
his pudgy fists barely span,
you deadeye Dad’s camera, can

feel your lips twitch a grin
at the flat skimmer you hold up in
proof of skill and judgement.

You are the cross stitch, the double rib,
the wool loop child, the grafting sib.

He will make a noisy splash, but
you will launch the longest throw, no
wet feet for you. Your stone will go

on and on; stun the other bank with a thud,
make those dozing cows choke their cud,
wake us to your aim, your absolute certainty.

I am the lockstitch, the first strand,
the fully fashioned child, the weft by hand.

Neither of you saw me watching. Dad
didn’t pan me into shot, shadowed
in the window behind the curtain, had
never thought to get the sentinel child
in on this pastoral act. You two showed
how boys could be boys, dynamic duo
trekking through the grass like geese who
head for home after hissing off strangers.

But you knew where I would be. You were aware.
The camera couldn’t catch your faces but I
frame them as I see them now. And if I dare
my wish, when I least deserve it you’re both there.