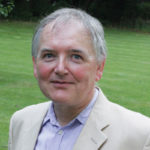 Paul Blake lives in London and works as a medical writer. He has had short stories and poems published in a variety of magazines including Iota, Brittle Star, Poetry Scotland, Scheherazade and Altair. His poetry has also appeared in the collections This little stretch of life and Said and Done and he regularly reviews for Brittle Star magazine. His poem ‘Triboluminescence’ was highly commended in the Forward Prize for Poetry.

and their bright coats
of foreignness – maroon
and purple.

bomb-site, broken wall
of factory or tenement –
they make their camp.

The sweetness of their airs
plays over brick and glass
in summer sessions, all

beesong and the tablature
of leaf-vein wings. Their words
are written in an alphabet

too blue for seeing.
The ones who make the rules
want to root out their companies

because they dance
with the unruly seasons
and do not belong

to anyone but themselves
and the children of hive
and field follow them.

from Massacre of Hummingbirds